With the advent of the Staying Scared Video Blog and the offer to answer horror based questions, it wasn’t long before those questions started creeping in. Intent on answering every single one of them, time constraints on the Staying Scared videos dictate those answers be rather short. Therefore, with each question I also intend to elaborate more in articles here on the Staying Scared blog. By the way, have a horror question? contact@stayingscared.com

DK, a viewer in Ohio asked…

Do you like remakes of horror classics and if so why and what is your favorite?

My short answer is yes and no, which isn’t much of an answer at all, so let’s explore some of them in depth.

While most remakes aren’t worth a single drop of blood in the original, by no means should horror fans discount and avoid either. Frankly, once one gets beyond the constant chronic comparison to the original, it may even be an enjoyable viewing. However, more often than not, the remake, unlike the original, will lack in ability to yank the viewer in and be nothing more than a rehashing, leaving the fan wondering why they watched in the first place. But, there are exceptions…

While not officially remade, it is a groundbreaking film that should at least be included in the discussion since it gave us one of the most iconic characters ever. Jason Voorhees was a hockey mask wearing hulk of a slasher with a penitence for killing everyone he met at his Crystal Lake stomping grounds. There were, as of 2009, ten sequels, most of which seemed to subsequently lose the originality that had made him famous to begin with. While though the effects and film quality of those sequels progressed, unfortunately the story didn’t and became something barely short of a joke. Nonetheless, fans appreciated efforts and watched, but most were not impressed. Whether rumor or fact, there was supposedly 13 of these flicks to be made and at one time, not all that long ago, the franchise appeared to be going full slash ahead. But with poor writing and story lines that was too far fetched to add realism, the machete appeared to get duller and duller until it was nothing more than a stained strip of rusted metal. For you first timers, explore parts 1 & 2. They are Jason’s glory time. Cha cha cha cha…ha ha ha ha

Halloween 1978 was the perfect time for John Carpenter to introduce Michael Myers, a young boy traumatized into bloody destruction by babysitter and boyfriend. Since then, Michael has grown up, switch from a happy clown mask to that of a rubber version of William Shatner, and has changed the holiday forever. For those familiar, I dare you to look at a glowing Jack-O-Lantern and not, even faintly, think of Michael.

This said, considering the seven sequels (not including the Rob Zombie versions which we will discuss in a moment), again, as with the Friday the 13th franchise, only parts 1 & 2 seem to warrant worthiness. As a matter of fact, part 2 was the highest grossing horror flick of 1981 and was intended to close the tale. However, the usual Hollywood dollar sign perception came into play and the franchise continued on with a part 3, Season of the Witch, a tale of a mask making warlock intent on destroying children which left Michael completely out in the cold. This tossed the Halloween series for a loop, making it seem more like a Goosebumps episode for adults. Both fans and critics voiced displeasure and soon enough Michael would be back in murdering grandeur. While I can say I oddly liked part 3, I did always wondered why it was even lopped in the Halloween series. Had it been titled something else completely distant from Michael, the flick probably wouldn’t have reaped wraith.

Rob Zombie and Halloween seem to naturally go together, but in all honesty, not everything goes as planned. In Mr. Zombie’s defense, I can say that his graphic effects are second to none and while his Halloween versions are enjoyable in their own little way, basically they are simply gruesome remakes with nothing really new to offer other than splatter. Some things are just too sacred to disturb and to me, Halloween is one of them.

Since George Romero’s classic inadvertently fell into the public domain, it appears that the flick is destined as a prime target for constant rehashes, most of which are certain to fall short. Let’s face it, zombie flicks may come and go, but there will never be another Romero.

Romero’s follow-up classic had it all, fear, gore and realism interlaced with political undertones and the film is still considered by many to be the best zombie flick to date. Zak Snyder’s 2004 remake is one of those rare exceptions where a remake impressed and was welcomed with open arms by Romero fans. Yours truly is one of those fans and even today, if stumbled across while trekking through the channels, will stop to watch yet again.

Like Friday the 13th, while never actually having a remake, there were numerous sequels which, for the largest part, incorporated new characters and progressed throughout its run. While every sequel wasn’t stellar by far, with a couple stretching the imagination, one could always count on macabre gadgets and inventions that were both gruesome and innovative. To me, these made even the bad sequels inviting. Torture alone is downright scary, but when the torturer happens to be a nothing to lose revenge bent engineer with a brain that would make Mensa sit up and take notice, respect is both earned and commanded. Puppets took on a whole new meaning with this film and a pig mask was never scarier. Part 2 is a favorite here, which gave us Amanda. Coincidentally, if torture is your cup of blood, check out the Hostel flicks and the Seasoning House.

The original and follow-ups were films that I like to call “funny fear.” All three were exceptional and if I had to select one, my nod would go to part two, with Army of Darkness running at its heels.

When the remake was first announced, I, as with many fans, was rather excited. But then came the film and gone was that appealing humor element, instead choosing a pure horror aspect. It wasn’t that the remake was poor, on the contrary it was well made but just wasn’t what we fans had grown to love about the Evil Dead. In my opinion, as with Halloween 3, it probably would have done better to distance itself from the original with a title that stood alone.

There is always something creepy about one’s femur leg bone being used as a soup base and it was the cannibalism that propelled this film into the spotlight. The remake held true with both storyline and effects that were updated, but it couldn’t match and capitalize on the initial anthropophagus shock of the original. Still, it is a good, squirmy film worth viewing…maybe more than once.

Although the remake was better than average, it still couldn’t touch the Snake Plissken the badass version and has emotional detachment. With the original, the seclusion was omnipresent and always lingered over the scene and this is where the remake went wrong, instead concentrating more on overall effect, which wasn’t nearly enough to propel the film. Valiant effort though.

The original was absolutely chilling and is the ultimate “demon or devil” flick. While I’m not entirely sure, I would wager to say that yet again, Hollywood stuck its grubby little hands in and attempted to capitalize on success with The Heretic. They should have left well enough alone as this follow-up was nothing less than horrendous and incorporated nothing from the original other than characters. Part 3 tried to get it all back and while there are a few scary scenes closely related to the original, it too was well below par.

Face it, we could go on and on about numerous and various sequels, Puppetmaster, Wishmaster, Nightmare on Elm Street, Alien, Creepshow, Hellraiser, Phantasm, Jeepers Creepers, Underworld and sooooo many more and if we did it would eventually become a novel. There is no possible way to cover every single remake in a single article and therefore, I’ve limited elaboration to just a few top dogs in order to move on and answer part two of the question…my favorite(s).

Now maybe I’m a little bias (after all, it was Romero who gave me my first real scare at the ripe old age of 7) but I still can appreciate an actually enjoy the other sub genres. This said, when considering favorites, I tend to lean away from slashers and more toward flesh ripping zombies and both Tom Savini’s All New Night of the Living Dead & Zak Snyder’s Dawn of the Dead hold special spots in this horror writer’s decrepit bloody heart. With ANNOTLD, while nowhere near having the original’s dark macabre overlay, the female lead plot twist was innovative and fresh. What I especially enjoyed about the remake of DOTD was the pace and time frame. No longer the 70’s, the storyline was highly believable, the film quality impeccable, the effects horrific, and by adding speed at which the dead moved (ala 28 Days Later, yet another groundbreaking zombie flick); this made the undead all the more fearful.

By the way, here and now is my prediction for the next big thing in horror… witches and witchcraft, but more on that later.

Thanks for the question “D” and I hope my answer sufficed.

Have a horror question you'd like me to answer? Send it to contact@stayingscared.com

Thomas
Posted by Thomas Scopel at 7:17 PM No comments:

If its bloody, its usually worth exploring 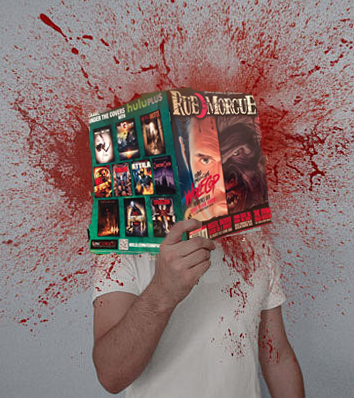 This time the Staying Scared video blog takes a look at the new issues of Rue Morgue, Horrorhound and Cemetery Dance Magazines, discusses why it takes a wooden stake to destroy a vampire, and a few other gruesome tidbits.

Want a horror question answered on Staying Scared?
Have a comment?
Want something reviewed?

Till next time ghouls...

The camera got a little bloody with this post 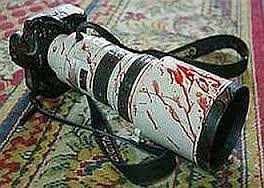 Well heeeeeello kiddies and ghouls...this time yours truly is trying something different here on Staying Scared, a video blog. Tell us what you think at contact@stayingscared.com or click here

And...
since I have some shared items in part two, embedding isn't allowed.
So...just click here to see part 2.