Well hello there creepsters, ghoulies, spooks, fiends, monsters, ghosts, witches, zombies and general necromancers, it's almost Halloween, our time of the year...a time when fears are raised and the darkness can harbor an abundance of horror. So, where do we begin? Let's start with some history first, shall we...

Halloween, the holiday celebrated on October 31st, is a night when unimaginable horrors are thrust upon us all, reputed to wander freely. Originally known as All Hallows Eve, the holiday started as a Celtic festival and was a celebration of the end of harvest. It was a time when the ancient Gaelic culture believed that on this specific day, the boundary between the living and the dead was overlapped or had a ripple and thus, the dead were able to return in order to wreak havoc in the form of disease or crop destruction.

During the middle ages, begging for treats was quite similar to that of Christmas wrassailing, but was called “souling.” This included less fortunate folk dressing up on November 1st (Hallowmas Day), to beg for food in exchange for offering prayers for the dead, promised to be performed on the following day (November 2nd) known as All Saint’s or All Soul’s day.

Prior to the turn of the 20th century, Halloween was virtually unknown in America and if it hadn't been for the thousands of Irish immigrants fleeing the potato famine, the holiday may never have become, for it was their customs that eventually evolved into the Halloween of today. And, evolve it did...becoming the most wonderfully creepiest time of the year.

Was the Jack-O-Lantern always associated with the holiday?
No. The Jack-O-Lantern stems from turnip lanterns, which were extravagantly carved in a ritual called souling, a remembrance tribute toward all the souls lingering in purgatory.

How did bats come to be associated with Halloween?
Bats originally had nothing at all to do with the holiday. However, in ancient times, with celebratory bonfires being rampant, these fires drew insects which in turn drew bats and therefore, the flying rodents became indirectly involved.

Where did the words “trick or treat” get their start?
Originally, “treat or treat” wasn’t part of the holiday & began in Scotland with children dressing up (known as guising) and going door to door in search of treats. However, usually the child would have to earn the treat by performing a trick. i.e. dancing, singing, the telling of a scary tale, etc…

Was the treat always candy?
Not at all. With Halloween being in the fall season and typically considered to be a harvest time, apples (candied and caramelized), roasted pumpkin seeds and even roasted sweet corn were the usual offerings. In Ireland there was also a customary baked cake called Barmbrack too. This fruitcake typically had something such as a ring or a coin baked within and the ring is reputed to indicate that true love is on the following year’s horizon.

When did American costumes appear?
While there had always been costumes involved with the holiday, in the U.S. this wouldn't be fully grasped until the 1930’s, when costumes started being mass produced. Afterward, the holiday’s popularity soared with both children and adults and the tradition of the Halloween costume party began.

Speaking of Halloween parties, what is one of the little known games involved?
While most everyone is familiar with bobbing for apples and the telling of ghost stories, there are some traditions that remain unknown in popular culture. One such tradition is Scottish in origin and is called divination. This is where a person carves a long strip of apple peel and tosses it over their shoulder. The landed peel is reputed to take the shape of and offer the first letter of the first name of the person’s future spouse.

Was the holiday always associated with spooks?
Not actually and it is thought that the holiday’s association with the Pagans and the occult has created this “fear” reputation, stemming from Christianity’s negative attitude toward celebrating Paganism. This misconception is probably responsible for today's holiday being widely considered to be a night when witches and the bogeyman roam. With this notion having been deeply ingrained in our psyche, the holiday is now tightly associated with horror, monsters and fright, now offering a plethora of scary television and film and an uncountable amount of fearful attractions.

Why are orange & black considered Halloween colors?
Orange is a predominant fall color while black represents death and darkness.

* In 1942, Halloween took a big hit in the treat department when sugar was rationed.

* The classic 1978 film "Halloween" was filmed in only 21 days, the mask is actually one of William Shatner and it was shot in the spring using fake leaves. Also, watch closely, while the location is reputed to be Illinois, the cars actually have California license plates.

* Don't fear the spider you see on that day, for it is a superstition that it is a deceased loved one watching over you.

* In it's first year of sales, the Ouija Board, with over 2 million units shipped, out sold even Monopoly.

* Besides All Hallows Eve, Halloween is also known as Samhain, All Hallowtide, The Feast of the Dead and The Day of the Dead.

* Owls, in Medieval Europe, were thought to be witches and to hear the "hoo hoo" was an indication that someone would die.

* Samhainophobia is the fear of Halloween.

* When "It's the Great Pumpkin Charlie Brown" first aired, children around the world sent candy to the blockhead as a sympathetic gesture. 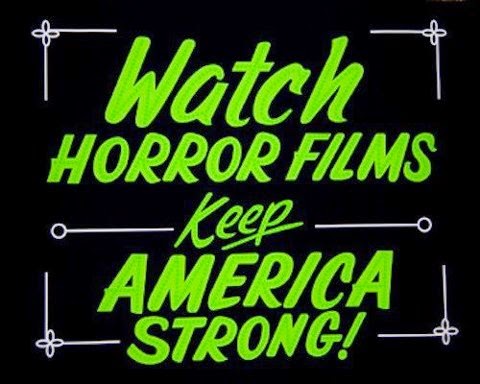 Looking for the perfect frightful flick? While there are many to select from, here's 13 to get you started...

12) The Texas Chainsaw Massacre 1974
While this was never a true story, it sure appears like it might have been.
(trailer)

11) Dawn of the Dead 2004
Zak Snyder's respectable homage to Romero's classic. However, watch the original (#4 below) first.
(trailer)

10) Creepshow 1982
Much like the old EC horror comics, this anthology is fast paced and scary.
(trailer)

9) The Exorcist 1973
One of the scariest movies ever made. I dare you to sit in the dark and watch this one...alone.
(trailer)

8) The Evil Dead 1981
With both humor and horror, one never knows what to expect next.
(trailer)

7) Phantasm 1979
There's always something creepy about a mini flying buzz saw embedding into a forehead.
(trailer)

5) Friday the 13th 1980
Jason was simply a male name before this flick. This was the start of "slasher" flicks and don't be surprised if the haunting "cha cha cha...ha ha ha"  soundtrack doesn't stick with you afterward.
(trailer)

4) Dawn of the Dead 1978
George Romero's followup to #2 below. Gruesome and frightening.
(trailer)

2) Night of the Living Dead 1968
The film that redefined zombies to how we view them now.
(trailer)
(Watch the film here)

1) Halloween 1978
The all-time classic that is a must every Halloween.
(trailer)

What have I been up to?

Well, I've been editing and rewriting my first full-length novel (A Lawnly Existence) which takes up a majority of my writing time. Of course, I've read a number of things and watched a flick or two too.

And I finally obtained a copy of what is considered by many to be the most dangerous book in the world. From the looks of what's on the pages inside, this is a book on witchcraft and sorcery and I should probably be most cautious when exploring it. (Author's Note: Wow was that creepy. All day I've been working on this blog and the Staying Scared website and all worked well. But, while I was uploading this picture, all of a sudden my internet service went down. This never happens and although it came back up in a short few minutes the coincidence is hard to ignore. Maybe I should get rid of this book...yeah right!)

By the way, on October 27th, yours truly and fellow cohort from Staying Scared dot com, Mary Fortier-Schutz II aka Nighty Nightmare is going to be on Whispers in the Dark. More on that later though. Read her new column here.

And here's a little creepy something for ya.

And so fellow horror fans, have a most frightening Halloween and if you see this guy lurking around...
RUN!
Mwhahahahahahahahaha! 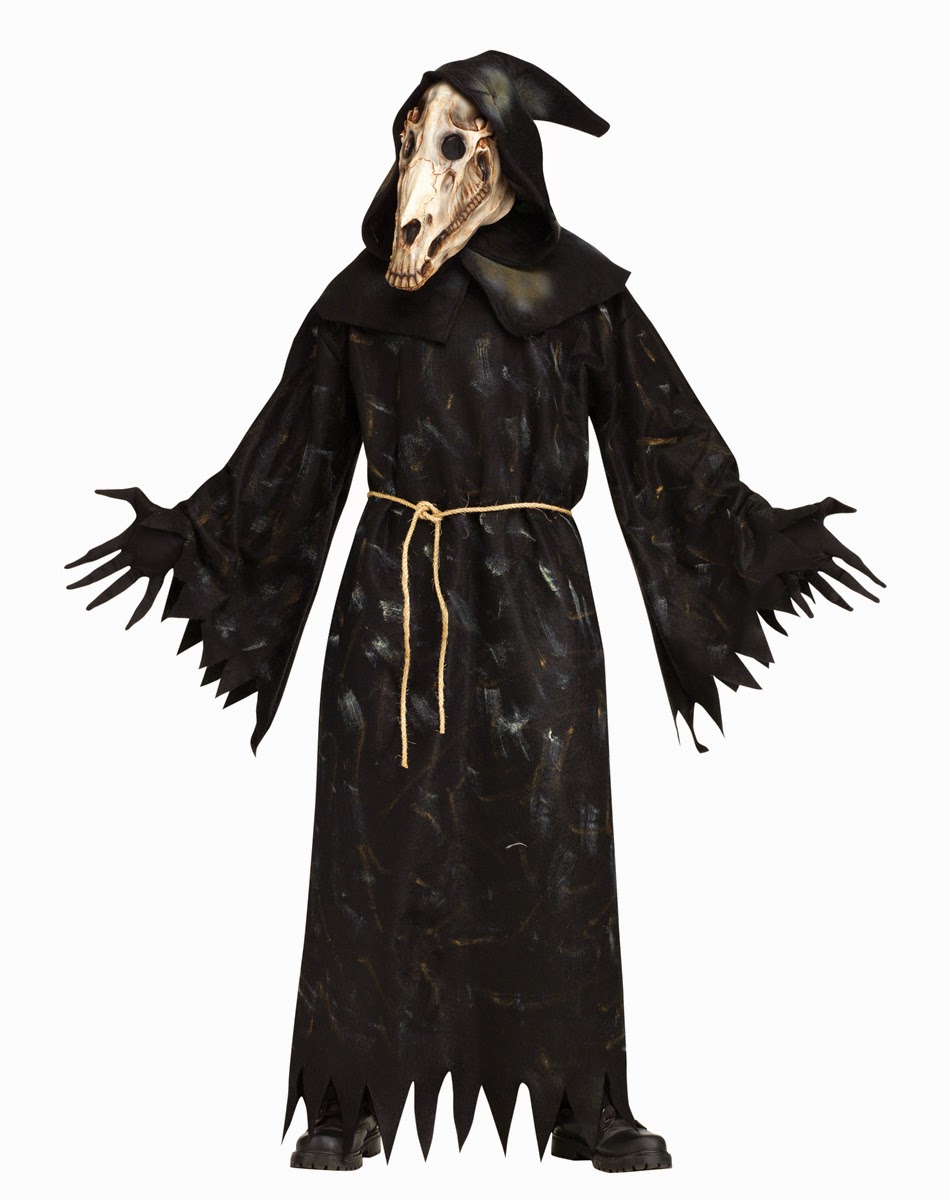 Posted by Thomas Scopel at 12:57 AM No comments: