A Day in the Life of Horror

Hiya ghouls,
sorry I haven’t been around for a spell, been busy digging other graves.

From film to print to gaming to crafts and collectibles, horror has always been my thing and that is no secret. But, through all this horror, it has always been fiction and never been anything detrimental, unless you count my odd and sometimes wicked sense of humor that may or may not rub folks the wrong way. Yes, I’ve been accused of being wracked, abnormal, unusual, offbeat, strange, peculiar, weird and completely unconventional, and this I accept, take it with a grain of salt. For the most part it's all, in an unhinged sort of way, humor anyway.

Maybe I am. Maybe I do have a morbid sense of amusement. As a matter of fact, I do own a hearse I'm slowly customizing. Maybe I like to be frightened and to also share the fear. I'm a fan of Jigsaw, George A. Romero, Resident Evil, Undead Teds, a horror dollhouse, evil clowns and probably a thousand other things too, but it doesn't make me a Ted Bundy or John Wayne Gacy? Speaking of Gacy, he and I vaguely share the clown thing but that's about it, and, I’d be lying if I said I hadn’t explored owning one of his original artworks for my ghoulish collection. It’s not like I collect serial killer stuff. Probably more a clown thing. 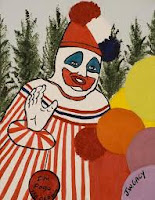 I guess what I’m trying to say is that I’m simply a guy who appreciates an emotion that has been around since the dawn of time, and my dawn began a long time ago with Night of the Living Dead, a terrifying film that set the standards in zombie genre.

You've never seen Night of the Living Dead like this!

What brought this rant on? Probably a couple of things…one, and more than likely the main reason, was that, besides working ungodly hours and using spare moments to work on A Lawnly Existence, my first full-length novel, I haven’t had much time for anything else, let alone blogging. If you must know, I’m on final rewrite, Chapter 16, page 188.

Nonetheless,
right now it is in the small hours, just past 4 a.m., and my routine (sparse days off included) has just begun. Usually it's 5 tho, kinda just woke up this morning to fingers having a mind of their own.Today is this blog piece. Tonight, if I can keep my nose out of an uncountable collection of hand picked interests, and providing something like The Walking Dead isn't on, I'll do it again. Everyday it's something and let me tell ya, writing a novel this way takes a while.

Prior to morning writing,
I typically peruse the news headlines and today a story depicting teens mocking a disabled man as he drowned caught eye. To me, this is absolute horror, despicable, cruel and very real. Point being, horror is everywhere. One simply needs to peer. Regardless, this one stroked ire in this dark heart. This was not a chilling fiction piece. This was real life, something far chillier.

George A. Romero passed this week at the age of 77. This came as a surprise since the last I heard he was making, or at least considering, another dead flick. He had always been a hero of mine and while traipsing the stairs heading up to the loft to write, I caught myself stopping to peer at the hanging signed poster with even more reverence.

There are a couple of films I have my eye on

Wish Upon seems like a rehash of The Monkey’s Paw times seven and having a demonic overtone. To me, there's always something enticing about what comes around goes around. Wishmaster on steroids maybe?


Jigsaw, on the other hand, is a completely different monster.
Gruesome engineering...plan and simple.

And, last but not least,
another surprise came in the form of an email declaring this blog had been selected by Feedspot as one of the Top 100 Horror Blogs, coming in at 78. 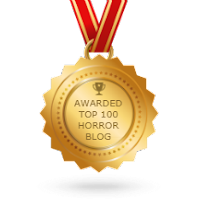 This wasn't supposed to be a monster, merely a place to share ramblings, maybe broadcast a few things. Thanks for the notice everyone.

Like mentioned earlier, being so entrenched in a few other projects had taken away the frequency of my postings and for that I am sorry. Kind of like rearranging the furniture in a room, change is due and walking away from the novel for a bit always brought new vigor. So, besides a little blogging, there are a few other projects to attack.

Of course, I could simplify and just concentrate on one single project but no...no...no...
ADD knows no boundaries and besides, he who dies with the biggest pile of bloody dead bodies wins right?

Until next time ghouls,
Stay Scared
Posted by Thomas Scopel at 7:50 PM No comments: