Beware of the hand you shake 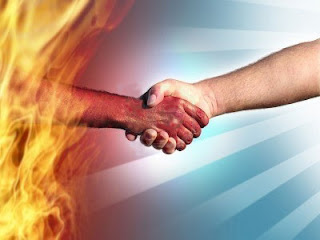 All final destinations are inevitable, which we each have power to control. There will be many well-defined ciphers and nuances, however vague, along the way and to not heed warning will only bring pain and misery. It has been said that ignorance is bliss. Believe me, it is not.
While I won’t go into specific details and only peruse the surface, with hope you will understand and make the change.
Selfish and egotistical, corrupt was my middle name, something that hadn’t troubled, never failing to maintain consistency and continuing on with what was considered normalcy. The signposts were predictable and never vague. Of course I was aware, simply chose to look away instead. Hindsight, like a film on a screen, was now blatantly projecting all those actions, forcing acceptance for my immoral, sinful and wicked ways. It was far too late. My doom was sealed. Tempting fate, calling its bluff had horrendous repercussions because fate doesn’t bluff, and neither does he. Like I said…it’s too late.
It all started in a dream-like haze, as if awaking groggily from an extended deep sleep. There was no reasoning and my body had no feeling. But, there was one exception, a constant churning nag, deeply embedded and gaining momentum that something was amiss.
Within the thick fog shroud were muffled voices, both high and low, some screaming and crying and some calm, and what they were voicing I couldn’t understand. Regardless, I had the sense that each appeared to be in plight and their impending fear, while complex and not comprehensible, was conveyed well.
A short, decrepit old man, like someone’s grandfather, stepped through the murky vapor and stood before me. His crooked and somewhat odd smile complemented his elongated face, but offered no immediate threat.
“Who are you?” I asked.
“While we may have never physically met…you know me and I’m certainly aware of you,” he replied in a calm voice, never taking his dark eyes from mine.
I tried to recall ever knowing or meeting this man, but was drawing nothing but blanks.
“You’ve known me for a long, long time now, and rest assured I was always nearby, watching and waiting. Of course there is no need to go into such frivolities, but allow me to commend, for your freely committed acts were nothing short of spectacular and I must say that I’m considerably impressed.”
While still unable to place knowing this man, he had an uncanny way of expressing himself and I must admit, his words inflated my pride.
“Obviously you needed no assistance and easily found you way. However, I will never appreciate the gesture since I am not gentle.”
The voices surrounding us cried louder as he reached out with a pointed finger and touched my shoulder.
Suddenly it felt as I was being sucked through a vortex, but abruptly stopped and was looking down on a prone body lying on a gurney. There was a distinct feeling of surrounding chaos as a man’s voice yelled clear before a terribly shocking jolt shot through my chest. A few moments later, while still hovering above, able to see the overall scene, the faces were initially blurred, but grew clearer and clearer and it became obvious that it was I who they frantically cascaded on.
One of them, a woman in a white nurse’s uniform, plunged a syringe with a very long needle deep into my chest and oddly enough, I felt the warm rush as the depressor forced the yellowish liquid into my body. Standing alongside her was a man waiting anxiously with silver paddles in each hand.
The woman withdrew the needle from my body and I felt it slip away. After a quick glance over at a machine, its alarm loud, consistent and even, a grim look overcame into her face and her head shook solemnly from side to side. She stepped backwards allowing the paddle holding man to lean in closer.
The man yelled clear and pressed the paddles to my chest. My body surged, heaving upward, but I didn’t feel that.
Suddenly I was standing in the fog with that little old man again, a sense of trepidation rapidly growing inside.
“Consider yourself fortunate,” his spoke with a grin, “like I said, I am not gentle and it is not often that one gets a very last look. However, this time, mischievous and malicious reared its wonderful head. Call it acerbic if you like and I certainly won’t deny. Nonetheless, welcome to our humble abode.”
He extended a stern, burnt and wrinkled, almost skeletal hand.
And…I probably shouldn’t have shaken it…but I did.

﻿Hiya Ghouls, hope your week was full of fright. Mine certainly was. Besides the weekly Land of Shadow and Substance column at Horror News Net, I submitted the fourth in a series called Interview With a Monster to Suspense Magazine. This time it was the Phantom of the Opera. Next time is...well, you'll just have to wait and see. And, I submitted a tale to The Best of the Horror Society 2013 anthology, a closed Facebook group that it attempting to finance an official website, as well as to William Cook's Fresh Fear anthology. Fingers are crossed.

And, with a vacation coming up, I intend to take full advantage and get to filming this short film I have in mind. All the technicals, lighting and equipment are ready and its simply a matter of fx and shooting the scenes. Easy enough....right?

Creep of the week 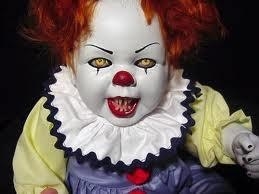 Well Fiends﻿, that's about it for the week.Like mentioned, vacation next week and a wedding to attend...1000 miles away. So, I'll  post something when I get back. Vidi well my fine, fellowed little druegies, vidi well! And remember... 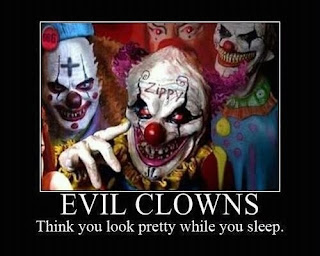