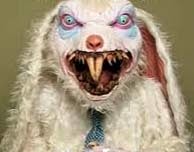 Hi there ghoulies and creepsters and welcome to Staying Scared. Well, it’s Easter weekend, which means jelly beans, chocolate, cavities that go thump in the night and pretty bad Easter Bunny “B” movies. So, without further adieu, let's dig into the basket of goodies.

While the slow beginning may deter many viewers, in the film's defense, this is essential to the storyline and does double duty explaining the stepfather's downfall, as well as introducing his "new" family and if the viewer can make it the 45 or so minutes into, gore fans won't be disappointed. Completely exploitative, behind the mask camera shots solely ripped out of the Halloween pages fit oddly well. Extremely small budgeted, in all honesty, for the amount spent (90K), the effects are actually quite believable and at times borderline stunning. Shot in low lighting, the creep effect fully contributes and even enhances suspense.

The basic plot of a drifter worming his way into a mother's heart we've seen before in The Stepfather. However, that is where it all ends and fair warning, this stepfather version is not for those squeamish about abuse scenes. 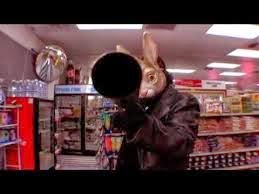 Remington is a grifter, always on the take and more concerned with self indulgences.
Nicholas is the mentally challenged son who views Easter as the best thing next to sliced bread. When he is left in the care of a deviant drug dealer, abuse becomes rampant and the poor boy takes solace in caring for his pet bunny.
However, rest assured, justice will have it's gruesome due, at the hands of a vengeful bunny mask wearing killer and don't be surprised if you will find yourself cheering it on.

With heavily depicted drug use and more than a fair share of nudity, Easter Bunny Kill Kill certainly isn't for the kiddies, but horror fans will probably find it fun.
And besides the film being worthy of mentioning in its own right,
since the slashed are vicious, hardened criminals and not simply screaming, large breasted helpless bimbos as in other slasher type flicks, Staying Scared is giving it two and a half creepy peeking clowns...and maybe even three.

Not one of the better frightful bunny flicks, Kottentail takes liberty with genetic researching and the result is...well...less than stellar. On a lighter note, the mask used is rather intriguing. 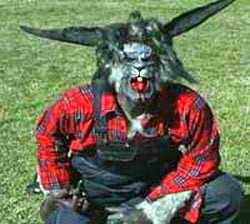 Hans Kottentail, a simple farmer, runs across a loose bunny whose genes have been altered and therefore, is the cause of viciousness. Hans is bitten and soon begins to transform, sprouting fur and desiring to eat vegetables...oh yeah, he also has one bad demeanor which becomes an all out 28 Days Later rage. However, this is not a Danny Boyle masterpiece, far from it, and comes complete with Playboy-like bunny "C" or even "D" actresses. For fans of the lowest budget, pure horror cheese and enjoying a good laugh while doing so, this ones for you.

While not necessarily an Easter flick, Night of the Lepus does pertain to bunnies and therefore, Staying Scared has included it. 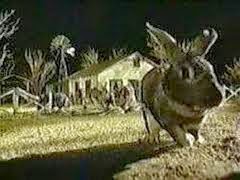 While certainly no blockbuster and shredded by critics far and wide, the premise (genetics again) is interesting enough, but with almost laughable special effects featuring non-threatening domestic rabbits shot against miniatures coupled with bad acting (surprising since Janet Leigh is one of the stars), the film doesn't have hope.

Now, let’s forget bunnies and candy and colored eggs and look at the undisputed, most brutal and horrific Easter movie ever made...The Passion of the Christ.

There is no denying that from a religious point of view, this film, due to its extremely graphic nature, will have you balling your eyes out and more than likely turning away at times. Coincidentally, for those unfamiliar with this film and intending to explore, be fully aware, for the book has most assuredly NOT prepared you for the horrendous sights you are about to behold.

However, from strictly a fear viewpoint, this film has all the makings of a top notch horror film and will certainly overtake many. Besides more gore than any fan would ever want and a creepy and wicked devil overseeing all events unfolding, there is an emotional gauntlet not felt in any other horror film subjecting the viewer to a gamete of emotions including, but not limited to, anger, terror, disgust, intrigue, despair, betrayal, gloom and hope.

This is one that Staying Scared makes a specific point to watch each and every year, not for the horror element mind you, but to reassure the faith, keeping it in check in order to maintain constant battle against a seemingly and increasingly Godless world. And, we would be lying if we said it didn't expose more than a few tears while doing so. It is the price I pay and in my humble opinion, Jesus is worthy of more than a few tears. Definitely true horror if ever there was.

And on that note...
Happy Easter
everyone! 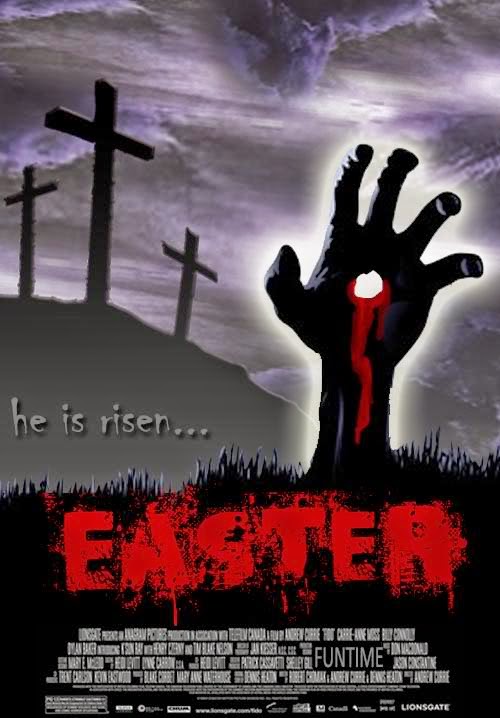 Stay Scared,
Thomas
Posted by Thomas Scopel at 1:14 AM