As a kid growing up in the 70s, there were two things that scared the hell out of me. One was thieves breaking into our house in the middle of the night. I grew up in the Bronx and the decade of the 70s was not kind to and its suburbs. Fear was everywhere. The Son of Sam was only a mile away, haunting our days and nights.
Number two, hands down,  was ghosts. I could have cared less about monsters under the bed, or demonic possession like I had recently seen at a very tender age in The Exorcist, or your everyday werewolves, mummies or vampires. They were all make believe, and some of them were downright silly. But, being a good little Catholic, I believed that everyone had a soul, and when you died, your soul was free to roam, at least if you were unfortunate enough to miss the stairway to heaven or lucky enough to avoid the trapdoor to hell. So it was entirely plausible that ghosts did exist, and when you thought about all of the people who had lived and died over the ages, they were probably everywhere!
Things got worse for me when we moved out of our apartment, where we were surrounded by lots of nice, living folks, to our first house. The vastness of the rooms, the empty corners and silence were a little overwhelming for me. Every creak and groan was a ghost. I’d never heard the concept of a “house settling” before, and I was convinced that something lived in the attic. It didn’t help that my mother would joke about it, even going so far as to name my imaginary ghost Harry. Wonderful, now it had a name, making it all the more real. “Hey Harry, can you please keep it down up there?”
Nights were often spent in tense anticipation under the covers, every little sound sending my heart and imagination racing. They were especially bad if I had just watched an episode of In Search Of, more so if it had been about ghosts. Leonard Nimoy was and is the narrator of my night terrors.
Of course, I grew up and out of my fear of ghosts in our house, but my belief never wavered. I’ve had instances as an adult, with corroborating witnesses, that have only solidified that belief, at times resurrecting the little Hunter holding his breath because I had just heard the step outside my room creak. When it came to the point where I could no longer bottle up my feelings on the matter, I took to my computer and started writing. I spent years conjuring up a fictional story about a man hunting for ghosts, putting myself in every page. It was like letting steam escape from a boiling kettle. Oddly enough, now that it’s complete, I feel like I’ve only just begun. Because I still very much believe, and I’m left with more questions than answers. Only now, I run to the odd sound or sight, ever curious, spine still tingling. Guess it’s time to head back to my computer. 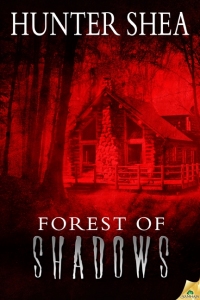 Hunter Shea’s book, , is available through Samhain Publishing and all online book sellers.
Here's a little about the book, Forest of Shadows:
The dead still hate!
John Backman specializes in inexplicable phenomena. The weirder the better. So when he gets a letter from a terrified man describing an old log home with odd whisperings, shadows that come alive, and rooms that disappear, he can’t resist the call. But the violence only escalates as soon as John arrives in the remote Alaskan village of Shida. Something dreadful happened there. Something monstrous. The shadows are closing in…and they’re out for blood.
http://store.samhainpublishing.com/horror-c-20.html?osCsid=080145454119b7588dc2efc2564900f7

Forest of Shadows is Hunter Shea’s first full-length horror novel, but his short stories have appeared in dozens of magazines and he is also the author of the critically acclaimed novella, Father Exorcist.  His second novel with Samhain, Evil Eternal, will be out next spring. Hunter Shea is the dark alter-ego of an ordinary man who happens to write children’s books, the first of which will be published by a division of Random House in 2012.
He lives in New York with his family and savage rescue cat, where he’s working hard on his next novel.  Visit www.huntershea.com -- he’s always happy to hear from you.
Samhain Horror Store : http://store.samhainpublishing.com/horror-c-20.html
Posted by Thomas Scopel at 12:32 PM