Peeking Under the Bed 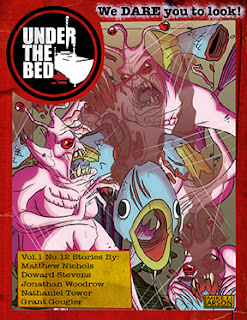 At first glance of Mike J. Larson’s cover artwork of Under the Bed Vol. 1 No. 12, it appears as nothing more than a pastel vintage nightmare born of sea monkey ads from the back of comic books. But, peer closer fellow Creeps, for deep into this fantastic artwork lies fear and is only the beginning of the trepidation that lurks beneath the surface…

Matthew Nichols’ Waiting for Ezra is a frenzied, gruesome tale of sibling rivalry told in flashbacks by an aged gentleman whose childhood memories are nothing less than horrifying. With shotgun ready, he patiently sits on the porch of his childhood home, watching the backyard lake for an inevitable return. More on this Illinois writer can be found at http://transeclectic.wordpress.com

Doward Stevens’ Leaves reads like a crime novel as a mob enforcer / hitman, now under the witness protection program, is burdened daily with finding and clearing leaves scattered about the yard. The perplexity of it is that there are no trees nearby.

In Jonathan Woodrow’s dark speculative tale The Wastelands, not all angels are pristine white. Some are simply dismal and joyless…and deviant.

Table for Twelve by Nathaniel Tower is a rather intriguing tale surrounding, as the title suggests, twelve men sitting around a table playing a vicious, forced game of numbers overseen and directed by a mysterious game master named Renald. While this tale will suck in the reader, the ending seemed to be a bit of a letdown. Of course, don’t let this deter you, for the tale is intense. I wanted more and found it at www.nathanieltower.wordpress.com.

Phantasmagoria by Grant Gougler takes you on a last carnival ride and it’s not going to be all that much fun. Find Grant at www.gruelgo.com.
(Author’s Note: My worse half, the sinful and malicious clown Wee Willie Wicked took a real liking to this piece. I suppose it was the carnival thing.)

Being a more than average fan of Night of the Living Dead, I thoroughly enjoyed the article A Tale of Two Barbra’s - Feminism and Zombie Films (first seen in Zombie Zone News in 2010). This refreshing compare and contrast take on the Barbra role using the Romero 1968 classic and the 1990 Tom Savini remake explores similarities differences in the two, touching on emotion and era differences.

The art showcase features Aaryk Noctivagus’ Cornucopia and includes an in depth interview with the artist where he allows readers to enter his creative mind.

Coincidently, cover artist Michael Larson also adds his flair at the conclusion of each tale and there is a tongue in cheek interview with this most talented, unsettling and eerie influenced artist.

Under the Bed is a monthly e-publication combining literary horror, art, opinion, commentary, interviews and independent film reviews. Often seeking contributors, submissions should be directed to editor@efictionmag.com and for more information visit www.fictionmagazines.com/underthebed. Managing Editor Wednesday Lee Friday gladly accepts questions and/or comments and can be contacted at wednesday@fictionmagazines.com.
Visit their Facebook page at www.facebook.com/UndertheBedMag or tweet them @Under_the_bed. 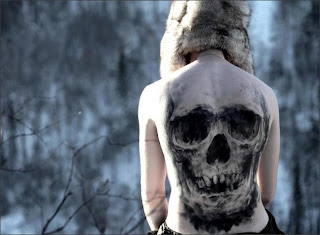 Until next time Ghouls and Goblins and Creepy Things,
Stay Scared
Thomas
Posted by Thomas Scopel at 11:44 PM