Twitch will be released by June 15th

Well folks, it's official...Last night I signed, received my arc's (advanced review copies) and am now an indie with Suspense Publishing. Twitch will be released by June 15th. It will be available at Amazon and various other online outlets, and in all formats such as Kindle, Nook, ipad, and iphone. And for only 99 cents!


Therefore, I thought I would leave the excerpt up for another day. However, for Friday, I have a "Daily Death" planned.


And, a couple of other exciting things happened too. After sending 25 or so review submissions out, I received a couple of responses back quite quickly. Sheri White said she would review Twitch for Horror News dot net and Norman Goldman at Bookpleasures dot com has forwarded it to his reviewers for consideration. Wow! that was that quick and I am most appreciative.


Hopfully, a few others, including Fangoria and Scream the Horror Magazine, will too. We'll have to wait and see.


AND, I had contacted Ellen Datlow to mention how much of a fan I am with her anthologies. Lo and behold, an hour or so later she requested that I submit "The Horrors of Easter" (Suspense Magazine April 2011) for possible inclusion in her "The Best Horror of the Year Volume Four."
So, it's going  into the mail today...
Between her and Stephen Jones, it's hard to choose a favorite!
Imagine that... 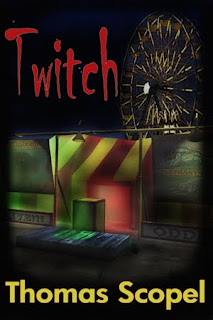 ﻿
In mid-June, my e-novella "Twitch" is released to the world. Here is a short excerpt:
﻿
“Huurey Huurey Huurey, step right up, see the…” She looked toward the voice. A barker, complete with top hat, bow tie, and tuxedo tails, stood at the center of a small stage alongside the tent row. With his voice bellowing and vividly animating with his hands, he enticed the passing crowd with the “amazing wonders” that could be found behind its canvas walls. Directly in front, sitting behind a ticket booth below him, was a midget, dressed as a mediocre clown and waiting on an increasing line of customers. She went, bought a ticket, and joined the line of people at the tent’s entrance."
Posted by Thomas Scopel at 9:00 AM