Being Wicked Is Hard Work... 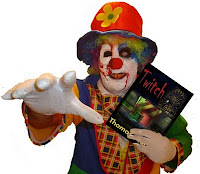 Hello there fright filled folks, sorry I've been away for the last few days. With my eBook Twitch being released and fully into a blog tour it has been rather hectic. I've been writing articles for the guest postings and rewriting a couple of pieces. So far, Monday I interviewed on Blaze McRob's Tales of Horror and Tuesday I guest blogged on Hunter Shea's blog. Today I'm on Carole Gill's blog and tomorrow (Thursday) I am scheduled to be on We Love Horror. Also, Saturday I will be on Suspense Radio. So, it has been a rather busy week. Regardless, below is the piece I guest blogged on Hunter Shea's blog. It is called My Road to Horror: the Beginning...Chiller Theater and it explains a bit of how horror came to invade my mind.

My Road to Horror: the beginning…Chiller Theater
By Thomas Scopel, author of TWITCH
Even before I had my first taste of Chiller Theater, I read horror comics and magazines like Famous Monsters of Filmland. So, I can say I’ve always been drawn to the macabre.
At seven years old, I first watched “Chilly Billy” Bill Cardille on Pittsburgh’s channel eleven’s Chiller Theater. I don’t recall the name of the movie, but I can tell you the movie surrounded astronauts marooned on Mars and when each one died, the remaining astronauts buried them and the dead person would rise and attack. Someday I’ll find out the name of the movie and I’ll re-watch. I suspect the film won’t have the same effect and will be considered cheesy by today’s standards. I won’t care and simply view with fond reminiscence.
Regardless with my father snoring on the couch and me sitting in the dark watching fear bit terrifying hard. It was the night I became a true horror junkie.
Although, that specific night offered clear weather and the reception, unbeknownst to me, was better than typical and so I set my sites for watching again the following week. All of a sudden, Chiller Theater had become, with the first viewing, one of my all-time favorite television shows. Coincidently, along with Twilight Zone, Night Gallery and most Hammer Films featuring Peter Cushing and/or Christopher Lee, I would be hard pressed to choose just one.
But, the following week’s planned horror viewing extravaganza was not to be when I learned how lucky I had been to watch the previous week’s episode. For where we lived (one hour southwest of Pittsburgh) and in a valley, the top of the house antenna had a rough time tuning in the distance channels and in cloudy weather, the channel offered a little more than shadowed snow. I may have been disappointed, but I wasn’t deterred…for I had a solution.
My Aunt Sandy and Uncle Dave lived eight miles up the road, on top of a hill, and their reception was exceptional. So, I started spending my Saturday nights with them. They always allowed and even joined me in watching the usually ghoulish films, at least until they fell fast asleep on the couch and in the chair respectively. Typically, I would make it through the first feature and just barely into the second before joining them in slumber on my spread out across the floor blanket. Of course, I always woke up with the sun in my eyes, angry at myself for missing the second feature and would secretly vow to remain awake the following week. More often than not, the vow never mattered.
And so, for some time following, this routine became my Saturday night norm. Eventually though, after being fortunate enough to have a portable black and white television in my bedroom, I learned tin foil makes a wonderful adjustable antenna and I started watching alone in the darkness of my room, surrounded by miscellaneous monster magazines and various horror based plastic models I had started to build.
I wasn’t yet a writer, but the seeds were firmly planted.

﻿
Twitch is available at Smashwords, Amazon and Barnes & Noble dot com for only 99 cents. If you are looking for a good read and enjoy creepy carnival stories, consider Twitch. But, be forwarned...it's not for the weak of heart.

Want to win a free copy of TWITCH (digital) along with a signed photo? Simply email winacopyoftwitch@yahoo.com and indicate you read this on http://stayingscared.blogspot.com. If you are the winner, I will request your mailing address for sending the signed photo. And, rest assured, I will not use it for anything else…I promise.
Posted by Thomas Scopel at 10:00 AM