Something Scary This Way Came 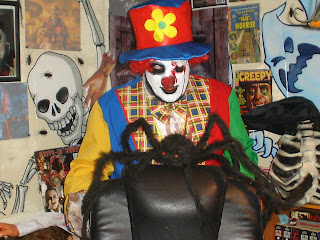 This past week, with regards to writing, I tried something completely different. Normally, I'll simply plop down in my office with a basic premise in mind and write with no actual direction. I may jot down the something at the beginning or the middle or the end or even just a small idea, and just let it flow from there. Usually, this means the tale, as it should be, will need to be rewritten a number of times, adding this and pulling that, until I'm completely satisfied and finished with it.


However, with A Lawnly Existence, a new tale I'm working on, I changed. Originally I planned on it simply being a short story. But, then I finished with chapter 1 and with it having almost 4000 words and barely scratching the story’s surface, I knew it was much more than that. Suddenly, I found myself entertaining excited thoughts realizing that this will most likely become my very first full-length novel.


It was during one evening last week, Thursday I think, when while sitting in front of the television, I created a haphazard outline of the tale. Never before had I ever used an outline. This was a first for me, an interesting, exciting and welcomed first I might add.
Now, I've read numerous books on writing, many discussing the need for an outline. Of course, there are those who argue that some authors simply prefer to write freely too, and I guess I always considered myself to be the latter type. That was before I created this outline. Since, I have refined that outline and I now find myself wondering why I had never used one in the first place.
As mentioned in previous blogs, I typically rise at 5 AM, write for an hour and a half, drinking coffee the whole time, and then get ready and head to work. What I wrote varied from day to day and could be anything from a submission letter to one of the various tales I’m working on to a blog idea, or any number of things. Point being, I was always writing without any direction. Regardless, for the past couple of weeks, that variable just happened to be A Lawnly Existence, and although I had put down numerous bits and pieces, I didn’t have an actual direction. Oh, I knew the how’s, when’s, where’s, and why’s of the tale, but didn’t work on it with any certain structure. Then the evening came when the idea to create an outline struck and productivity grew tenfold.
Immediately, with the exception of adding a quick note here or an idea there, this outline fast become if you will, my story bible. I now find myself much more focused with knowing which direction to take and what part of the tale comes next. And, I can’t deny always get more accomplished.
So, I now have direction, something I sorely needed, but didn’t realize it until that piece of paper with I’s and II’s and 1,2,3’s and abc’s showed me. Things flow much more quickly now, knowing exactly what I’ll be working on each morn. I’ve even found myself pondering the following sections while at work, and that aids in fleshing out the tale.
How or why I never worked with an outline before amazes me…it’s not like its rocket science or anything. I just never had. Maybe it was my lack of writing experience or maybe it simply didn’t dawn on me. Whatever it was, from this point on, whether it be a short or long tale, I always start with an outline.

Wow! Did you happen to catch this week’s episode of The Walking Dead? Who would've thought? While I'm not going to give away spoilers, I will say that a major player was involved in a horrendous act that cost them their life. And, it wasn't entirely their fault. With only a couple of episodes left this season, I can say that I'm both looking forward to, as well as not looking forward to the season finale. It is the one single thing I don't like about the show. Like a typical sporting season, the show runs for a couple months and then forces you to wait until the new season begins for a new episode. Maybe they should take NASCAR's lead and have a nine-month season.

Willie got a new batch of movies to review from Horror News, and already he’s itching to get viewing and writing. They include the Omen trilogy, Demons, Dust Devil and The Deadly Spawn. He also wants to get busy taking a bloody stab at those old Hammer vampire flicks starring Peter Cushing and Christopher Lee too. Oh! He'll probably get one of them out of the way today, so be on the lookout for his future reviews here.

Have you happened to see all The Hunger Games items flooding into the market? I’m guilty of picking up a District 12 tee shirt for Paula and the new People magazine special edition. Suzanne Collins has a bonifide masterpiece on her hands. From what I’ve read, they are staying true to the books and if this is correct, it will be a great movie. So, if you haven't read the books yet, I highly suggest it. But, I’ll also warn that once you do, it will be extremely hard to stop. While this series has been compared to the Twilight series, I suspect The Hunger Games will become even larger. See the trailer here

Which reminds me, when did vampires learn to love?

Vampires are supposed to be, at least according to Stoker and everything I’ve always learned about them, night prowling bloodsucking creatures that sleep in a coffin located in the basement of a castle and only come out at night to seek nourishment from the living. They are capable of transforming into various shapes and creatures, such as a bat or a wolf; do not cast a reflection; crosses keep them at bay and a wooden stake becomes your best friend. At least that is the very basic definition of the vampire I know.
But then, all of a sudden, here comes Stephenie Meyer with her book series beginning with Twilight, a series that tells the story of a mortal female and an immortal vampire male in love. Now God bless you Stephanie and all your fans, but to me, something doesn't sit well with this overall picture. I mean c’mon, after all, a vampire’s heart doesn’t beat and they certainly aren’t emotionally bound. Vampires seek one thing only…and that is blood. They do not go to dances and high school and certainly do not play a sporting event by the light of the moon in a field out in the middle of nowhere. And, another thing, if a vampire is completely dead, how is it that Bella could get pregnant? What, does this vampire Edward just happen to have one single living part?
While I have not read the series, I have seen the movies and in all honesty, they are somewhat entertaining…even if they aren’t believable. But, then again, this is fiction, something I can certainly appreciate and to fans of it, I say to each his or hers own.
None-the-less, they are not the vampires I grew up with. You know, the ones that rise out of a coffin hunting the countryside biting the neck of the first victim they find. That's what I grew up with and it's quite difficult for me to accept anything different. I suppose today’s teens, having grown up with Bella and Edward, will probably feel the way I do when the new vampire generation comes out…you know, the robotic ones controlled by Martians from Venus. 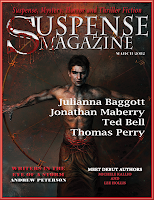 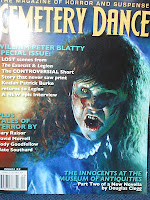 Received two magazines this week, the March issue of Suspense Magazine, and a back issue of Cemetery Dance # 62, with a William Blatty interview and the lost scenes from The Exorcist and Legion. The chilling cover is what compelled me to order it and I certainly wasn’t let down…simply terrifying. You can get it here…if there are any left!

I must say I'm exceptionally happy with The Daily Death’s consistency in sales. This is probably attributed to the fantastic reviews it has received. I've sent a few more copies off for review, one in particular to Cemetery Dance, a magazine that takes its horror very serious. Hopefully they'll consider reviewing it. Fingers are crossed. ﻿

By the way, my very first novella, Twitch, about a deformed carnival sideshow attraction who takes abuse and harbors a dark secret is also available…get it here for only 99 cents.

And, there are only 7 days left to sign up at Goodreads to win one of five signed copies of my sophomore novella, The Daily Death - How I Killed My Co-Workers In 30 Days, a collection of 24 macabre tales of demise. (see ad at top left of this page) or, to sign up, click here.
Well, have a gruesome week ghouls and I'll leave you with a little food for thought! 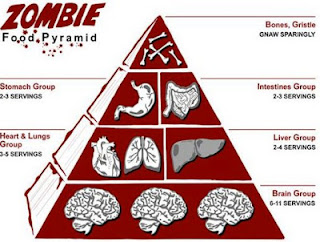 Posted by Thomas Scopel at 8:22 PM