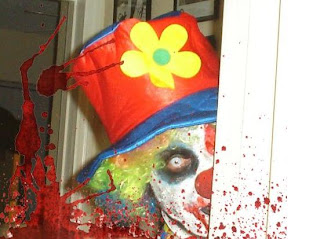 Well, I’m running late this week folks. That damn Willie wanted to put something on his blog, so I let him out for a bit. Actually, he was kind of good this time. Not like the last time when body parts were scatted around the house… Of course, I can never seem to stay mad at him for very long. heh heh! Speaking of Willie, he just reviewed Hostel for Horror News Net. And, remember those old Hammer Films starring Peter Cushing and Christopher Lee? He’s planning to revisit those real soon too. They’re his all-time favorites. You can keep up with him at his blog, WeeWillieWicked.blogspot.com.

﻿So I’ve written on A Lawnly Existence for the past week and seem to be getting somewhere. The problem is that I continually keep coming up out of the grave with and incorporating more story ideas. Originally, this was simply supposed to be a short, maybe 5K-word piece. However, it appears as though it is going to be longer than expected. Can’t say whether it will end up novel length or not, but it certainly isn’t a short story anymore and is growing like a weed. Of course, it’s taken me away from writing on Future Past, which is and isn't okay. The plus side is that time away always aids refreshment. And, during the past couple of weeks I happened to consciously notice that my writing is becoming more refined with considerably less concentration. I suppose I suspected this would naturally occur over time and with experience, and it seems to have at least begun to. I’m now making a conscious effort to no longer rush and quickly put out a piece…but that doesn’t mean that the compulsion to is completely gone either. Regardless, this is probably typical to most writers, especially the relatively new ones…like me.

Been reading The Year’s Best Dark Fantasy & Horror 2011 edited by Paula Guran and there are some great tales in it. Unfortunately, I seem to only find the opportunity to open the book just before going to bed, and typically make it just a few pages before nodding out. I just finished Raise Your Hand if You’re Dead by John Shirley, a post-apocalyptic tale about trolling in a boat below the Golden Gate Bridge awaiting bodies (whether it be suicide or murder) to fall and heisting their possessions. Looking forward to the next tale; As Red As Red by Caitlin R. Kiernan.

Besides this, that and the other thing, I’m considering writing series of essays detailing some horror questions I have. Here are a few of my thoughts;
Why does it have to be a silver bullet?
Why won’t a zombie eat a cow?
Motivation…the primary factor compelling Jason, Michael and Freddy
What’s the best horror magazine?
Why do they call it “The Witching Hour?”
When did vampires learn to love? 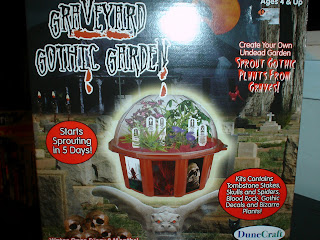 Found this gruesome little gothic garden kit while out and about. The kit includes odd plants, tombstone like stakes and some miscellaneous items such as mini skulls and plastic spiders. Of course I had to get it. 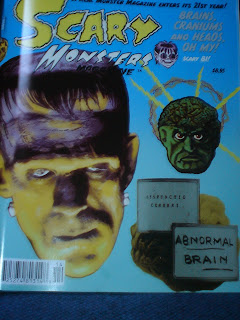 ﻿
﻿While at my local bookstore I ran across a copy of Scary Monsters Magazine, a quarterly periodical that takes an in depth, nostalgic and historical look at monsters in general, primarily the older ones. The format reminded me of the late sixties and early seventies monster mags and certainly brought back memories. Chock full of pictures, this magazine’s coverage of old, as well as newer horror films seems second to none. Even the ads are intriguing, resembling those of the classic Famous Monsters of Filmland, Creepy and Eerie magazines. If you are a fan of television’s Chiller Theaters’ type of programming from days gone by, and a connoisseur of the likes of Vincent Price, Peter Cushing, Boris Karloff and many others, this rag is certainly for you.

The Daily Death – How I Killed My Co-Workers In 30 Days has had another high profile review. This time it is by John Clements for Horror News Net. Click here to read it.

I’ve been interviewed before, primarily for blogs and such, but I’ve never been interviewed for a college research class…until now. Raina Lorring has sent me 13 (heh heh 13…that’s great) questions, with the end result to be a magazine type article. She has mentioned maybe even considering attempting to publish her final product. Good Luck Raina. 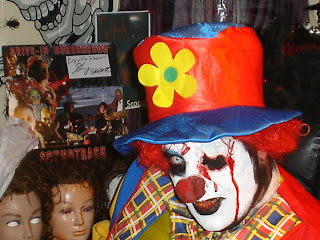 I, well actually Willie, just finished reviewing The House That Dripped Blood. The review should be posted soon. Watch for it here.
And, while we’re on the subject, I, well Willie again, went out and bought a Dracula four film pack. It contains Horror of Dracula, Dracula Has Risen From the Grave, Taste the Blood of Dracula and Dracula A.D., all are Hammer Studio Films starring (in my opinion, the best Dracula actor Christopher Lee). Watch for the future reviews here.