An odd thing happened this week. I was filling up the tank and the pump stopped here. I have to admit that it was kind of eerie too. Either it is destiny or evil....MWHAHAHAHAHAHAH! Regardless, it gave me the idea for the flash piece below called The Last Introduction. 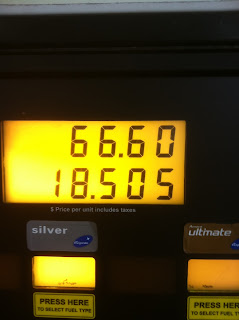 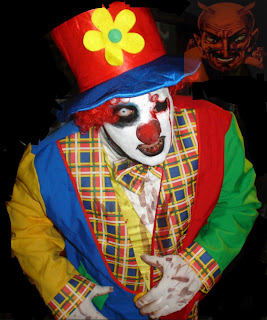 The Last Introduction
In some strange way, I probably should have known. There were many signs along the way, which I clearly see now. But, it’s too late. At the time, I never noticed them and constantly tempted fate, calling its bluff. The problem was that fate doesn’t bluff, and, like I said…it’s too late.
When it happened, I didn’t know where I was. My mind was a haze. It was dream-like. I had lost all reasoning, like just awaking groggily from an extended deep sleep. My body had no feeling, with the exception of a constant nag churning deep inside, seemingly growing momentum.
In the distance I heard their muffled voices, both high and low, and searched for them, but couldn’t see where they came from. Exactly what they were saying, I couldn’t tell either, only that they seemed to be in plight.
The man standing before me was quaint, short and old, like somebody’s grandfather, with a crooked, somewhat odd and maybe even eerie smile.
“Who are you?” I asked him.
“While we may never have met…you know me,” he replied in a calm voice, never taking his dark eyes from mine.
“You’ve known me for a long time now. I was always in your drink and smoke, just lingering…waiting. I was always nearby watching your freely committed acts too. Of course, no need to go into those. You know which ones I’m talking about. While I am considerably impressed with your personal guidance, and although you truly needed no assistance from me, I will never appreciate and thank since I am not gentle.”
The voices surrounding us grew louder and turned into cries as I tried to recall ever meeting this man. He simply returned my confused stare, almost understandingly, and smiled wickedly.
Just then, plain as day, I loudly heard the word clear and felt a horrendous shocking pain in my chest. I was no longer standing in the fog and was now floating above my prone body, lying on a gurney, surrounded by numerous frantically working obvious medical personal.
One of them, a woman, held a syringe with a very long needle. I watched as she plunged it deep into my chest and felt a warm rush as the depressor was pressed, forcing the yellowish liquid to disappear into my body. Standing alongside her was a man holding a silver paddle in each hand. Each paddle had a curly wire running from it to a machine. The woman withdrew the needle and quickly glanced over at a machine and looked back at the paddle holding man, shaking her head solemnly. The man yelled clear, the folks backed away and he put the paddles to my chest.
Just as quick as the vision came, it left and I was back, standing in the fog with that little old man.
“I probably shouldn’t have done that,” the man spoke, “but, as I said, I am not gentle.” He extended a slightly quivering fully wrinkled, almost skeletal hand.
And…I probably shouldn’t have shaken it…but I did. 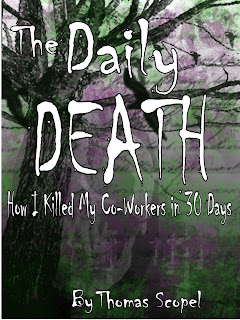 Almost 500 people (between Amazon.com and Amazon UK and even one from Germany) took the time to download The Daily Death during the 3 day get it for free promotion. Obviously, I'm not the only macabre person in the world. All I can hope for is that everyone enjoyed the read and will mention it here or there, preferably taking the time to post something about it on Amazon. So, if you are one of those that took the time, please take the time to post a review. Here's the Amazon link.


Speaking of mentioning, I am currently looking for reviewers who are willing to read it and post an honest review (good or bad). So far, I've heard from a few who intend to. Most notable, Sheri White (Horror News dot net) and Ellen Datlow, one of my all-time faves, who is considering it for a potential mentioning in her latest edition (vol 5) of The Best Horror of the Year she is currently editing. Of course, I can't convey what an honor it is to be considered by both.


Also, Jason Kohl of The Fear Corner is going to review it too. Now if I can just get Fangoria, Rue Morgue, Scream and a few others to notice it, I'd be as happy as a zombie gnawing on a bloody hunk of freshly torn flesh.

And...the first review is posted. It's by Dale Elster and it sounds as though he enjoyed the read calling it like "Greeting Cards - from Hell."  Read the review here

So, what am I currently reading? Right now I am most of the way through The Best Horror of the Year Vol 3

And, I'm been caught leafing through the latest issue of HorrorHound magazine.


Of course, my Kindle is fully stocked too. If your an avid reader and haven't gotten one yet, maybe it's time you consider it. It doesn't take away from my pleasure of holding an actual book, but it does give me a place to store around 600 books. And that opens more bookshelf space, which I am most certain to fill soon enough.

And...this week I put down 3000 words on my novel Future Past. I'm hopeful that I will have it ready for an editor sometime this summer.

﻿
So, until next week horror fiends,
Stay Scared,
Thomas
Posted by Thomas Scopel at 10:56 AM