Two books on Amazon...so what's next?

﻿
Now, typically I write horror. However, I’ve had this novel idea for the past couple of years and have finally decided to pursue it. It’s an idea that’s not considered horror at all and would probably fall into the science fiction category / thriller type category. I have 30k words down on it and all the characters fleshed out. The beginning and the ending are complete and so, I just need to fill in the blanks, which obviously will take some time since writing time is somewhat constrained. You see, I work a tremendous amount. I rise at 5:00 am every morn, write until 6:30 am, and head to work. Sometimes I get home before dark, most of the time I don’t. Therefore, I suspect this piece of work will take a while. Regardless, here’s a taste.
What would you do if you could look back and see what could have been? Would you do it?
Maybe you’d find out that your life might have been better. On the other hand, maybe you’d find out that your life may have been worse too.
Maybe you would have had a different career…or a different husband or wife…or lived someplace else.
You might have made more money or ended up on skid row.
You may have lived longer or you may very well be dead.
Now, what if there was an actual place of business that you were able to go to in order to find the answers to these things.
Would you go?
This is the basic premise of my novel “Future Past.” A complex tale following five characters as they explore what could have been at a place that very well could exist…and the repercussions they endure for knowing what could have been.
·         Dillon Watson is extreme motorcycle rider that wants to know what would have happened had he made the backflip.
·         Wilma Gladstone wants to know what would have happened had she chosen to work on her term paper and not go to the football game.
·         Lenard Smyth is a womanizing stockbroker with a deeply harbored secret and wants to know if he was ever a truly different type of person.
·         Cathrine Banister, a one-time most sought after and shallow super model, has always sought love to no avail. Older now, she wants to know if she ever found it.
·         HR Delaney has a reformed drug addict for a wife who went back to her old ways and gave him a stillborn child. He wonders what would have happened if the child had lived.
These are the main characters (although, I’m not quite sure if I’ve completely settled on five or not just yet) and their dilemmas in this tale. As for the company they visit, let’s just say that they are fully explained and something more than simply somewhat believable. Of course, this offering a only tiny insight and I plan to keep much of it secret until it is finished and ready to be published. It is my most ambitious piece to date and like I said, clearly a step away from the typical horror that I normally pen. But, it is a tale that I’ve wanted to tell for a while now and I plan on telling it in 2012…before the world ends…heh heh! 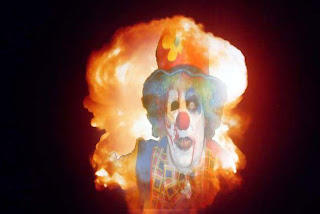 In the meantime, both Twitch and The Daily Death - How I Killed My Co-Workers In 30 Days is available on Amazon in both e-format as well as paperback. Get a copy today. 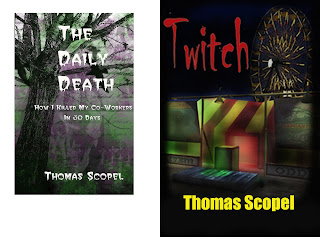